The Who Where What When Why of Oakville, Ontario, Canada

I discovered the great city of Oakville just recently. In 2017, we started going to the chiropractor. At the referral of a family friend, we found our way to a particularly stunning Oakville based Chiropractic company.

With the long car trips to Oakville, we had to discover great local eats, drinks, and stops to make the most of our time away from home.

Needless to say, Oakville is the time of city I could end up living in.

When Was Oakville Founded?

It all started in 1793, according to the history section on the Wikipedia Oakville page…

Essentially the land that is now Oakville was purchased by Canada (then ‘Upper Canada’) off of the Mississauga aboriginal tribe. Slowly, certain areas around the lake were lumped together, and ultimately the land around Dundas street, began to be settled.

Early industry in Oakville consisted of ship building, and transfer ports for agricultural and construction commodities. Oddly enough basket weaving was a saving grace for the growing community after a recession forced the closure of one of the main foundries. Interesting history right there!

It wasn’t until 1962 that the town of Oakville merged with it’s neighbors in the area, Bronte, and the Township of Trafalgar. This powerhouse of Lake Ontario communities is what we now know as Oakville proper.

Who Was Involved in the Evolution of Oakville?

Notable people of influence on the road to today’s Oakville include:

William essentially won the auction for the lands in the area, but left the development of it to his son, Robert.

What Do I Love About Oakville, Ontario

Personally one of my favorite parts of traveling to Oakville is Whole Foods. The large mostly organic grocery store is a feel good type of place where you can find plenty of healthy foods. They also serve Bulletproof coffee there, which is a tremendous plus for me.

We travel to Oakville once every other week to visit our Chiropractor who is based on Ford Drive. 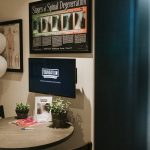