Have you ever visited Oakville in Ontario?

If you ever imagined yourself lost daydreaming on picturesque shores of a great lake, surrounded with maritime panoramas and breathing chestfuls of life in, imagine no more.

Oakville, Ontario has that, and more.

You would not have been the first one to be interested in Oakville’s great shores.

In the early 1800s, the shores of Lake Ontario were the exact reason for the European settlement of the area.

The natural harbour of Bronte had acted as the primary commercial hub and point of entry for both merchants and sailors.

A Heck of a Good Purchase

Originally a home to the First Nation of Mississauga, in 1827, Colonel William Chisholm bought the land and thus planted the roots of what will eventually become present day Oakville.

The first step towards forming a permanent community was the opening of the town’s first shipyard and improved harbour.

Shipbuilding and lumber production soon became the staple of a growing Oakville economy, and the blooming business attracted quite a number of settlers.

To incentivize clearing of vast woodlands of the area, each settler was required that they clear and fence a piece of land not smaller than five acres, build a house the size of about 16 by 20 feet, and establish a path that connected the property with the main road.

Just after the initial influx of immigrants, the first glimpses of a bustling settlement-to-be could already be seen. Sometimes you just know when it’s right!

Industrious settlers utilized their geographical and economical potential to a great extent: cleared spaces were tiled, the harbour was developed, and the streams and waterways of the virgin land sprouted with grist mills and sawmills.

Flour, lumber, and grain became the goods that connected Oakville to the trade map of Canada and the rest of British Empire.

In 1857, the prosperous settlement of Oakville was designated a town, with Colonel Chisholm’s son its first mayor.

However, global circumstances caused a surplus of world grain supply in 1870s, which led to a sharp decline of local grain business. This coupled with the development of Grand Trunk Railway that bypassed the town’s harbour forced its inhabitants to venture into other businesses.

The by-product of strawberry industry was baskets in which strawberries were packed: the same baskets that now stand as a historical symbol of Oakville’s industry.

By the time of these events, Oakville had already established a reputation as a top destination for many summer tourists.

The visitors would disembark from their steamships in order to enjoy the renowned mild and pleasant weather of Oakville.

Quaint vistas and glamorous architectural style of the town were only a plus to the already lush tourism opportunity. So ideal was the place that the visitors built summer homes, and eventually settled in them permanently.

Even back then, Oakville’s allure was irresistible!

It would be unfair not to mention Oakville’s role in the “Underground Railroad” and Ontario’s general role as a safe haven for fugitive African Americans.

In fact, in the first couple of decades, the population of African Americans doubled from 20,000 to 40,000; an impressive number for that time.

Grain vessels of Oakville housed numerous fugitives and helped them reach the rest of the Upper Canada as stowaways; a shining example for this being Captain Robert Wilson and his ships.

So much so that for years after the American Civil War, African Americans would come to Oakville to celebrate Emancipation Day and visit him at his home.

That house exists and welcomes visitors to this very day.

The Town of Oakville jealously protects its history, having bought for preservation a hefty number of historically significant houses, offices, and industrial buildings.

For example, the founder’s home estate Erchless stands proud and tall as it oversees the Oakville Harbour and Sixteen Mile Creek, just as it has done for six generations of the Chisholms.

“Erchless” reflects both the aluminous location and the Scottish roots of its founder, the old Colonel – it means “by the stream” in the Gaelic language, the language of the founders’ ancestors.

Take a tour of Oakville Heritage Trails and see many more standing monuments of Oakville’s deep history, the Erchless being one example, and among others such monuments as the Oakville Basket Company, The Old Granary, Bronte Harbour, as well as numerous parks filled with wildlife and greenery, like Gairloch Gardens, Coronation Park, and Lakeside Park.

For the energetic young-at-heart who look forward to festivities and crowds, Downtown Oakville has something to cater to all tastes.

Whether you’re a fan of avant-garde music, film festivals or knitting, there’s an event that celebrates that and gathers flocks of fellow enthusiasts. Not to mention that Downtown Oakville itself is a breathtakingly beautiful spirit of urban, bustle, and vivacity – come and see!

If the above was not enough to make you fall in love with Oakville, here are some lovely fun facts to make you reconsider:

To the south, Oakville shares a border with Burlington, and to the North, Mississauga. There is also a lateral connection to Milton. A fantastic brotherhood of cities, all make Ontario great.

As a matter of fact, Oakville’s weather is just one thing that is wonderful about Oakville. History is another. Nature yet another. Friendly folks another one.

You name it, Oakville has it, and has it wonderful. Even visitors. Why not become a wonderful visitor yourself? 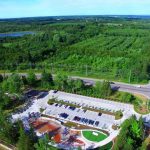